It has been some time since I’ve written, but I’ll be back regularly. You’ll see from below that we’ve had some chaos in our lives.

One might not call our lives “quiet” by outward standards, but throughout our married life we have had many hours of evening quiet—reading, playing word games, or watching a movie. Louis and I met in June, 1994 at a Quaker Earthcare Witness[1] (QEW) meeting in Massachusetts. It was my first time attending a QEW Steering Committee meeting, though Louis had been attending since 1989 and was a member of the Steering Committee.

It wasn’t love at first sight, but I had been reading Louis’s articles in the BeFriending Creation newsletter (BFC) and admired his writing skills and insights. I enjoyed meeting Louis and we do remember doing cleanup and washing dishes together one evening. I was very taken with his chromatic harmonica playing. It was filled with tenderness and was really quite wonderful. But other than a few interactions over meals we didn’t have much opportunity to get to know one another.

My time at the meeting was a bit frenetic. After registering to attend, and prior to the meeting, I had submitted my application to be the sole employee of QEW. So, while at the meeting the search committee decided to interview me since I might get on the short list of applicants. It was a joyous and fun interview over breakfast, everyone dressed in shorts and by the next meeting in October I was announced as the new General Secretary and Business Manager.

Over the coming months I had many opportunities to interact with Louis about publications matters via internet and at a March Steering Committee meeting, where we went grocery shopping for supplies for the meeting, so that by the time June rolled around in 1995, we felt we knew each other quite well. In short, one starry night we took a walk and our lives were changed forever. Since Louis lived in Missouri and I in Vermont it took six months to untangle relationships and possessions and by December 1995 we were living together in the woods of Vermont in an off-grid, home-built house.

Since my three children were already adults and Louis had chosen not to have children (due mainly to the issue of over-population of humans on Earth), it was just the two of us unless the children and grandchildren descended on us for a visit. So you can picture the kind of life we developed in our cozy nest, finding out what we jointly liked to do and finding the rhythm to our joint life.

Now, this doesn’t mean that we lived quiet lives. We were, and still are, both actively involved in the life of Burlington Friends Meeting (Quaker). We also are involved in the life of our community. We care about the fate of the earth and want very much to help create a healthy and sane world, so working on environmental issues in Charlotte, our town, seemed a natural match. Since I worked for QEW and Louis eventually became the QEW Publications Coordinator, we were active on a national (and sometimes international) campaign to help people deepen their relationship with Earth and lower their ecological and carbon footprints. This took us to many parts of North America, Central America, Cuba, and England.

Our personal work evolved into a real strong focus on where we lived, helping spawn the “localvore” movement (eating and focusing on local foods), and, several years ago, co-founding Transition Town Charlotte.[2] We’ve also been very involved in our local Quaker Meeting, serving in a variety of capacities and on many different committees. We’ve been a terrific team, with complementing skills and with lots of mutual appreciation. 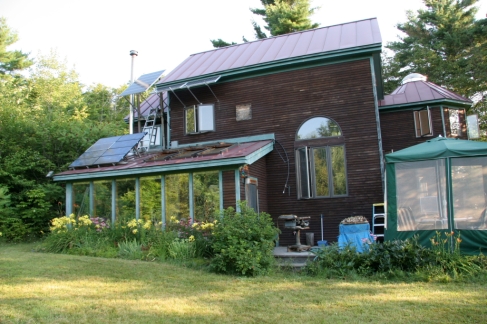 This photo is what our home looked like before our lives radically changed.

Over our years together we’ve increased our vegetable gardens to include many fruits as well and have grown enough to “put up” for the winter plenty of food to keep the sun in our lives through the dark days of winter. And during those dark winter months a typical evening would find us sharing our time by Louis reading aloud to me while I worked on a quilt.

So, why would we have been open to be approached by our son and daughter-in-law, Rich and Jenny, with the idea to move in with us with two of their school-age children? And why would they want to move from sunny Southern California to the winters of Vermont? Read on to learn of our reasons, goals, and experiences as we joined lives. And also read, in their own words, what each family member’s hopes, vision, and experience has been.

(This  was written in the midst of our home construction site with no one having a completed space of their own and with a new dog on the scene who wasn’t cat-friendly, (and a cat who didn’t understand why the dog was so aggressive) so chaos had descended on the little Toad Road homestead.)

[1] When QEW was founded it was called Friends Committee on Unity with Nature (FCUN) and although it’s name wasn’t changed until 2004 it’s easier for me to just use the current name throughout this book.

I am searching for a global vision for a sustainable, resilient world in the face of peak oil, climate change, and economic instability.
View all posts by ruahswennerfelt →
This entry was posted in Uncategorized. Bookmark the permalink.